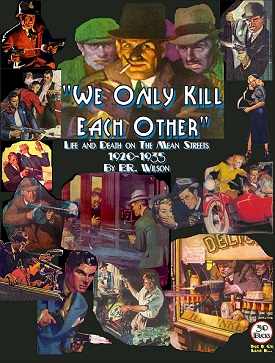 "We Only Kill Each Other" (WOKEO) has been in development for over fifteen years with an emphasis on "realism," rather than Hollywood and legend. It's a fast-paced game of criminal-on-criminal violence with the possible involvement of law enforcement. Other rules make no distinctions between three distinct "theaters" in this era of criminal enterprise with the common denominator of violence--"Beers Wars," (1920-1933), "Dillinger Days" (1934-35), and "Mafia Wars" (1931-35). Each has distinctive features making it unique regarding characters and possible games.

Characters are generated in detail by types/classes (but don’t think of D&D!)—gangsters, hoodlums, police, detectives, FBI and Treasury Agents, each with the opportunity for skills, areas of special knowledge, and even weaponry by period and subject. Distinguishing Features, including Peculiarities/Personality Quirks/Addictions/Compulsive Behaviors, Speech Impediments, as well as detailed physical attributes and Criminal Records, are just some of the descriptors that will apply.

WOKEO recognizes that such criminals are not soldiers, responding to orders and formal leadership. They tend to be violent, under-educated, and commonly unintelligent, striking by stealth and surprise, rather than seeking stand up battles. "Discipline and duty" do not characterize them, while opportunism and fear of retaliation does.

Combat rules are fast and deadly, with a wide variety of basic weapon types available—but players can rarely make the choice. Tommy Guns, and BARs are "terror weapons," and far more rare than Hollywood pretends. You won't find one often, but when you do, watch out!

A "Director" can create the episode, but “pick-up”games are easy--just use any of the pre-generated Characters that come with the game, or roll up your own. Play is card driven, cuing individual Characters to declare and carry out their Actions. Almost everything--use of "Mitts," "Pins," "Moxie," "Brains" and "Brawn"--is determined successful or not by a single D10 roll with limited modifiers—no combat results tables, no formulae, just down and dirty quick results with a system quickly learned. No written orders, just a few items to mark off on each Character Record Card.

Players normally play one Character, but up to four are possible. Rules for "Extras"--simplified Characters operating in groups--can allow larger games, but most games need fewer than a half-dozen figures to a side, though police can show up in numbers if a crime is still in progress.

There are detailed rules for Drive By Shootings, Automobile pursuits and Collisions, Tear gas, explosives, body armor, brawling, "gun molls," and optional rules for specific Wound Location/Effects, Rescue of the wounded, use of the garrote, and more make WOKEO a complete package.

WOKEO also recognizes "Square Johns"—civilians who can as easily fall victim to the police as the criminals--as key elements. Pedestrian and Vehicular “Panic” rules guarantee chaos in the streets with the very real risk of them becoming unwitting targets--and not just of the criminals. Law Enforcement bullets are just as deadly!

Police, FBI and Treasury Agents all have their own rules. Police use of "The Third Degree" during interrogations can be part of the game, as well as the competition between "G-Men" and local police. And if you think the "G-Men" were Supermen from the start, think again. WOKEO does not depict things the way Mr. Hoover would have wanted it to!

“We Only Kill Each Other," (unlike the author’s own “Gangbusters” from TSR eons ago), makes no attempt to include the economics of organized crime. It is strictly for flying lead, racing automobiles, and blood on the sidewalk. WOKEO literally allows players to "cut to the chase" and engage in all the mayhem Prohibition and Depression era crime has to offer. With all the gory details, this is easily the grittiest miniatures game of criminal violence yet.

The rules come with three introductory Scenarios, one for “Beer Wars,” one for “Dillinger Days,” and one for “Mafia Wars.” Each provides full information on necessary Characters, figures, sets, vehicles, and more. There are schematics, photos, tables, information for each side, as well as "secret" information for the Director. No Scenario can play the same way twice.

WOKEO also addresses the urban environment central to crime of the period. Police call boxes, sirens, alarms, police whistles, auto and pedestrian traffic (varying by neighborhood and time of day) all are part of the mix when perpetrating or confronting crime in the streets. The rules are designed for use with model buildings like those from Old Glory, Reviresco, and TVAG's own “Mean Streets” and “Mean Sets," but the use of 2D maps of the players' own devising is covered.

Street Schematics are provided for planning of hits and/or law enforcement raids, and a full page city street map of “Newcago,” locating key addresses, public buildings, and businesses provides the wider environment where Bootlegger gangs can vie for control through beatings, bombings, and shootings.

Other features include a comprehensive list of 28mm gangster/law enforcement figures manufacturers, as well as buildings and vehicles. There are also lists of useful Websites, movies of particularly inspirational value, and a section showing how easy--and fun!--designing your own scenarios can be.

The perfect bound book is 8.5" x 11", with full color covers, 98 pages (50 of which have color tables or artwork), and 10 pages of enclosures, including three full color printed Cheat Sheets, and 7 card stock sheets of pre-generated Characters for the three Scenarios included.

All buyers are entitled to free PDF's delivered by E-mail providing a reduced size b&w version of the Action Deck, and a set of all five Character Record Card types. These are available simply by requesting them from [email protected]

And there's MORE: Buyers of the Print and PDF Editions are offered three free PDF Interior building designs from "Mean Sets," each of which supports one of the three Scenarios in the book. Normally a $30.00 purchase, completely free for the asking. Full details are in the rules.